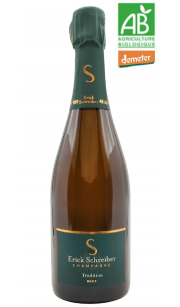 This historic winemaker of Biodynamic viticulture in Champagne invites you to discover the full potential of these natural and atypical wines.

With its biodynamic viticulture and rare grape varieties, this house is a real invitation to discovey. The Erick Schreiber champagnes will make you explore a new facet of this wine you thought you were so familiar with! 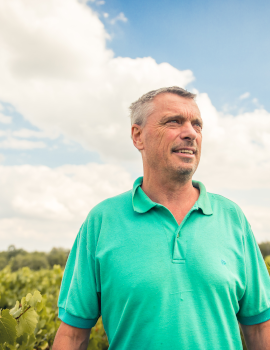 With such a wide range of aromas at his disposal, Erick Schreiber plays with blends to create unique biodynamic champagnes.

The origins of Biodynamic Champagne

Underlying the atypical and aromatic wines produced by this House lies the commitment of a man who has been advocating for more than 30 years a viticulture closer to nature.

It was in 1987 that Erick Schreiber, then a young winegrower and winemaker, undertook an in-depth study of the chemical and biological influences acting on the vine and the wine. He became aware of biodynamics in 1989 and quickly realised that this method was not illusory and, on the contrary, echoed many of the problems he had had to face over the years.

What is a Biodynamic champagne?

Biodynamics aims to reconcile two opposing forces acting on the vine: one turned towards the centre of the earth and the other towards the sun and the stars. This method of viticulture proposes to strengthen the links with the soil and to nourish the vine with light and heat to harmonise its fragile natural balance. Practically speaking, Biodynamics has a number of positive effects. It notably allows the preservation of soil fertility to the benefit of the animal species living in the vineyard. These are considered here as auxiliaries to the winegrower. The drastic reduction of inputs resulting from this method of viticulture also has an impact on the wine produced from these vines. Biodynamic champagnes are thus purer and have a great straightness that can generally surprise. They are also richer in freshness and mineral aromas. Contrary to its elitist product image, Biodynamic methods lead to champagnes that are much more digestive and much appreciated by the general public.

Constantly striving for perfection, Erick Schreiber has also been interested in the effects of sulphur on wine. Used to disinfect the casks, this natural element slows down the ageing process. It took Erick Schreiber many years of experimentation to develop new winemaking methods that would allow him to eliminate it. This is how the "Astral" cuvée was born, the first Erick Schreiber champagne made without sulphur and marking the beginning of a new range of promising champagnes!