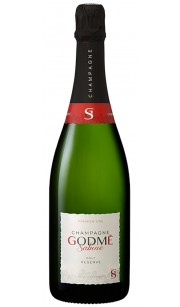 This family-run business, whose estate covers 5.5 hectares, invites you to rediscover the full potential of the Premier and Grand Cru parcels of the northern Montagne de Reims.

Pinot Noir and Chardonnay are honoured here and are available in 8 single-variety or blended cuvées. The Zéro Dosage and Extra Brut allow each terroir to express its full potential for your pleasure! 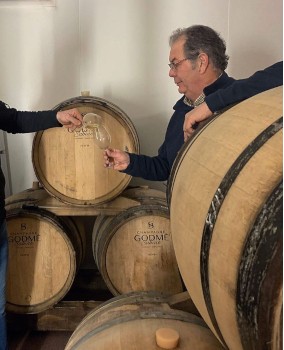 A family of winemakers from the Montagne de Reims

This family business is the result of the union of two winegrowing families, the Godmé family, originally from Bouzy and Verzenay, and the Thomas family, based in Villiers-Marmery.

Champagne Godmé's first traces appear in 1920, the year of the marriage of Joseph and Antoinette Godmé, the grandparents of the current winegrowers. Since then, generation after generation, the tradition has been perpetuated and the brand has adapted to the times. This is how the brand name of the family's champagnes has evolved over the years. Formerly marketed under the brand name Godmé Joseph, then Godmé Bertrand, Godmé Père et fils, the house wines are now sold under the name Champagne Godmé Sabine.

As the name changes reflect, each generation of the family is keen to mark its wines with its own identity. Today, Sabine, Jean-Marie and their children, Marie and Matthieu, work together as a family to develop their vineyards.

Champagne Godmé is also and above all a very beautiful vineyard of 5.5 hectares, with parcels in three Grand Cru villages (Verzenay, Verzy and Beaumont-sur-Vesle) and two Premier Cru villages (Villiers-Marmery and Montbré).

For many years, the Godmé Sabine vineyard has aimed to integrate the vines into their environment and to this end has adopted a reasoned approach to viticulture (HVE).

It is from this magnificent plot of land that Champagne Godmé Sabine produces 8 cuvées, either single-variety or blended, with different proportions in order to allow the terroir to express itself fully.