This family house is located in the least known terroir of Champagne: the Côte des Bar. This region, which borders on Burgundy, is renowned for the very high quality of its Pinot Noirs.


The champagnes produced by the Bernard Robert family stand out not only due to the typicality of their aromas, but also the subtle use of an extremely rare grape variety in Champagne: Pinot Blanc. 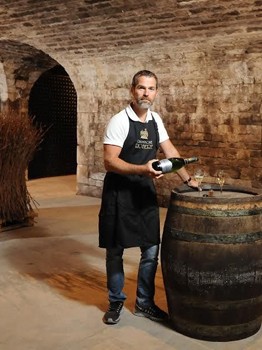 The terroir of Bernard Robert champagne

The Côte des Bars long remained in the shadow of the great Champagne terroirs, which are the Côte des Blancs, the Reims Mountain, and the Marne Valley. These regions are not only geographically interconnected, but also the historical home of the Great Champagne Houses, including Perrier-Jouet, Moët & Chandon, and many others.

Situated much further south and separated by more than two hours drive from Épernay, the Côte des Bar long appeared a poor relative. This was all the more true in the last century, which saw the Aube winegrowers fighting hard not to see their terroirs detached from the Champagne fate. However, the soils are very similar and the grapes of this region have been, and still are today, very appreciated by the great houses which buy them by the kilogram in order to elaborate some of their emblematic cuvées.

Beyond these conflicts, the Côte des Bar is above all a terroir in its own right, with its microclimates and a very great typicity which deeply impregnate the champagnes produced there. This remoteness from the heart of Champagne has also enabled the region to preserve a unique winegrowing heritage. This region indeed benefits from the presence of grape varieties that have almost disappeared in the rest of the region, such as Pinot Blanc, Petit Meslier, or Arbane. These are all varieties of grapes that can be found in the champagnes produced in this region, whose presence is far from going unnoticed, and for the better!

The history of Bernard Robert champagne

This house is undoubtedly one of the oldest champagne houses founded in the Côte des Bar.

It was founded in 1945 by two winegrowers: Marie-Madeleine DOSNE, winegrower, and Bernard ROBERT, her husband. Both of them were trained in champagnisation, a different method from the traditional production of still wines. Far from the usual image of a champagne house, the first year of production saw a mere 300 bottles produced. Nevertheless, the first stone of the family adventure was laid!

From their union were born seven children, including three sons who carried on the work of their parents. In particular, they began construction work on the current cellars. They wanted to replicate the traditional vaulted cellars of Champagne. To do so, they sought out cut stones from the demolition of buildings in and around Aube (mills, farm buildings, etc.). Each stone was then re-cut and adjusted to fit the intended purpose. This colossal task kept the brothers busy for six years, with one span being built each year. At the same time, they continued to work in the vineyard and to develop the family home. In 1990, they built a modern extension to the cellars in order to meet the modernization needs of the estate.

The estate has remained in the family and is now managed by the family's generation of winemakers. It now covers some thirty hectares, divided between the various heirs, but united under a single brand. This vineyard, spread over seven communes, was deliberately grouped together by the family in order to preserve the typicality of the champagnes produced by the house.

The family vineyard is home to the three main Champagne grape varieties, Chardonnay, Pinot Noir and Pinot Meunier, as well as one of the "forgotten" varieties of the appellation, Pinot Blanc.